Our journey in the Autism Spectrum

[Ed. Note: A little back-story first in case you may be unfamiliar with this tradition]

I grew up celebrating St. Nicholas Day. On December 5th we would put our stockings or shoes out for St. Nicholas to fill. If we had been good we would wake on December 6th to find goodies in our stockings and sometimes an occasional small package or two nearby. (Our stockings are not filled on Christmas day). We were warned that if we were not good, we might find coal or sticks (or a “switch”). I vaguely remember an older neighbor-friend of my grandma’s and great aunts’ talk of Krampus  or Knecht Ruprecht  a couple of times when I was very young and  I remember my grandma “shushing” her when he was mentioned. I don’t think she wanted to talk of such “evil” for fear of scaring me. (I think they must have combined the two figures over time or maybe my very young brain did that considering I was probably only 3 or 4 at the time?) I know that we only celebrated St. Nick in our house and there was no other talk of the darker companions.

Oh, I do so miss my grandmother and her stories with German names and phrases and songs thrown in and she and my great-aunt singing Christmas Carols in German. I loved to hear her stories growing up and the folklore that were certainly carried over with my ancestors from the “Old Country”. I guess that is why I keep this tradition with my kids; even though it is one tradition that my husband just doesn’t “get”.

Anyway, pardon my nostalgic look back at St. Nick’s past…

So, today is December 6th and my kiddos woke to a very modern and authentically Rabinowitz-style St. Nicholas Day. Molly was out the door at 6:20am with Grant for jazz rehearsal, probably giving  her stocking only a quick glance. Lucy, still being sick, didn’t even think about her stocking until much later. The morning continued with the loud and somewhat chaotic dance routine of getting Henry to the breakfast table.

And this is where the “miracle” finally happens. (I know, right? Thanks for hanging in there!) As Henry heads into the kitchen for breakfast he realizes their stockings have been filled and there are gifts for each of them.

Then I asked a very big favor from him, ” Henry, since Molly and Daddy had to leave early and Lucy is still sleeping and not feeling well, do you think you can wait until after school and we are all together to see what St. Nick brought you?” I braced myself waiting for an outburst followed by whining and fighting…

Then he was ready for breakfast and off to finish getting dressed for school. No fuss. No muss. AMAZING!!!! To quote Grant when I relayed the story to him, “That is a whole lot of un-medicated HUGE!” (Henry hadn’t gotten his ADHD medicine yet. lol!)

Henry gave the lion sticking out of his stocking a pat on the head later as we went out the front door to catch the bus and he was off. Wow! (again!) Then “miracle” #2, Lucy finally woke up to see the stockings and SHE was also willing to wait until her older siblings got home. Which is pretty tough considering she is home sick today! (more amazement!)

So, this afternoon, the kids will celebrate St. Nick together. Or at least the goodies he brings. I will celebrate St. Nick for kicking Krampus’ (autism) butt and look forward to many more small (but oh so HUGE) gifts my son and daughters give to me! And I hope some day the kids will understand the stories and traditions of the holidays and see them to be a gift in themselves. 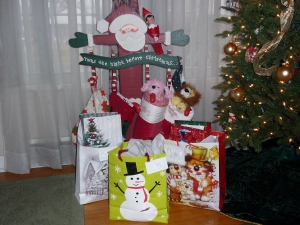 Message from the Editor: I am truly honored and thrilled to have Kara from karacteristic.com guest blogging here today! Kara is an awesome mom to a brilliant and beautiful little girl, Ellie, who has Asperger’s. Our families met last year at an ABA Parent Training Program at TouchPoint Autism Services. I am very proud (and a lot grateful) to be able to call Kara my friend. Not only is she inspiring as a creative, super-mom parenting in the Spectrum, she is an artist and published (contributing) author, and one of the funniest! people! on! the! planet! Thank you, Kara! And CHEERS!~Karen
And without further ado, here is Kara:

One of my fondest memories as a kid, involved making my own Halloween costume every year. Planning started in August and I had a Mom who threw herself into the creative process with me which made it lots of fun. I started that tradition with Ellie. My little Aspergian has loved bugs since before she could talk. As that was at the tender age of nine months, she’s been talking about bugs for quite some time. So, I wasn’t surprised when she wanted to be a butterfly this year. I was, however, surprised by the following:

* The detailed schematic drawing I received of the desired costume.
* The desired costume is to be half Monarch, half Blue Morpho.
* It needs to have a thorax, abdomen, proboscis, and compound eyes.
* This butterfly will have stinging capabilities and web-making skills.
* When the butterfly moves, it will leave a trail, much like a cartoon character showing motion on tv.
* The butterfly wings will light up for added drama.
* In some way, a time line will depict the butterfly’s life and include the egg, caterpillar, pupa, and chrysalis.
* Larger than life milkweed and flowers are necessary for caterpillars and butterflies need sustenance.

As I type this, I’m suffering third degree burns on my finger tips from the hot glue gun, not to mention a tremendous lapse in creativity/logistics/physics abilities. If any of you have ideas for showing cartoon motion in real life, I’d be forever grateful. Also, please send band aids. And tequila. Happy Halloween!

I am a Chameleon in the Spectrum

Other places you can find me:

Keep scrolling down to see my favorite links!

Autism-related links and blogs I love:

My favorite links and blogs of friends and fun that provide me distraction to help me maintain some sanity: